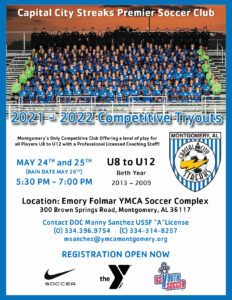 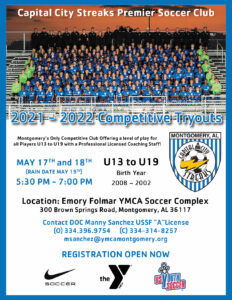 Congratulations to Michaelyn Manning for committing to play at Auburn University at Montgomery-AUM.
Michaelyn plays on the Capital City Streaks 2002 Girls!
Michaelyn’s commitment, passion, and technical ability has truly set her apart as a striker and has gotten her to this point. The Capital City Streaks and YMCA has been grateful to have had Michaelyn as part of our program. We are very proud of you and have no doubts you will go in and make an immediate impact. Enjoy the moment!
AUM plays in the NCAA II Gulf South Conference!#GOSTREAKS! 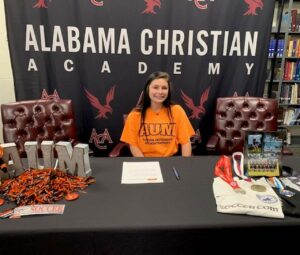 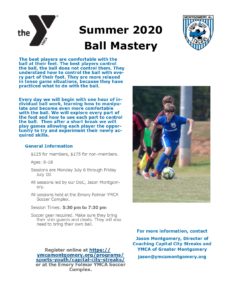 Every day we will begin with one hour of individual ball work, learning how to manipulate and become even more comfortable with the ball. We will explore every part of the foot and how to use each part to control the ball.  Then after a short break we will play games allowing each player the opportunity to try and experiment their newly acquired skills.

Come and learn from the best!

Players of all levels are welcome as this camp is designed to learn the game in a fun filled environment, playing all kinds of games throughout the day.

We work on foot skills, body movement and coordination.

For more info about tryouts email our Director of Coaching, Jason Montgomery at jason@ymcamontgomery.org.

Please register in advance as it helps us with planning purposes. If the link does not work for you please email the Director of Coaching, Jason Montgomery, at jason@ymcamontgomery.org

The Ralph Lundy Soccer Academy is coming to Montgomery and the Emory Folmar YMCA Soccer Complex.

Make sure that you do not miss out on this opportunity to learn from one of the best. 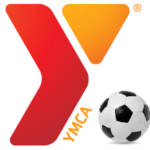